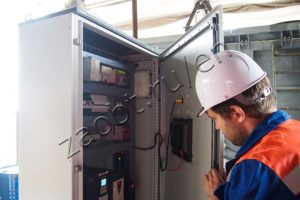 At the industrial site of “Sosnovoborsky Machine-Building Plant” testing of modernized TDP-2-3000 took place. Based on the technical specification and the needs of the Customer — the company KrasMK LLC (JSC East Siberian Oil and Gas Company), — it was decided to modernize the design of the unit.

First of all, the efficiency of the heat exchange surface was increased, thus reducing the amount of fuel consumed and increasing the reactor performance.

According to the regulations, the TDP-2-3000 test includes 3 consecutive stages. The first stage, mechanical one, includes testing of the output screw for rotation. The second stage is thermal tempering of the reactor, heating it to 400 °С and fixing the achieved temperature for 6 hours. The third stage is thermal testing, in which the reactor temperature is increased to 450-500 °C.

After putting the reactor into operation, the specialists proceeded to a test under load, where sand with water was used as raw material. After a certain time, the dry fraction in the form of glowing sand entered the charging hopper with the help of an auger.

Tests have shown that the reactor of the upgraded design operates steadily under conditions corresponding to the technological mode.