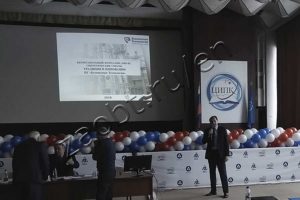 Safe Technologies IG traditionally took part in the 21st scientific and practical conference on the ‘Current State and Prospects for the Development of Wood Board Production’. The event organized by the Scientific Research Institute VNIIDREV JSC was held on March 21-22 in Obninsk, on the basis of the Rosatom Technical Academy.

Issues of interaction between producers of binders and producers of wood boards were discussed at the conference, which brought together representatives of industrial enterprises of various scale, as well as scientific specialists in the woodworking industry. The conference was attended by the representatives of the largest companies, such as Metadynea or EGGER, and the technical staff of the Russian woodworking plants.

New information, technical ideas and technologies of the industry were discussed in a heated discussion headed by Alexander Shalashov, General Director of VNIIDREV JSC. Particular attention was paid to the standards of formaldehyde emission from wood boards that became several years ago, to which many woodworking plants have not adapted yet.

The representative of Safe Technologies IG reminded the audience that the ways to achieve a guaranteed release of an environmentally friendly board are known and they are in the construction of own resin shop capable of fine-adjusting binders for specific presses. The delegate had also spoken about the progress of the new Industrial Group projects in this industry, not forgetting to mention the receipt of the certificate of the American Society of Mechanical Engineers (ASME) by the enterprise in February 2018.