On May 30 in Salekhard, Yamal the first strategic Session on ecology was launched. This event aims to find and develop solutions for the elimination of waste disposal sites in the region. The Session was one of the key events of the Year of the Environment declared by the Yamal government.

Among participants one could find state authorities, local government representatives, members of organizations operating waste disposal and recycling facilities and companies able to offer technological solutions for recycling and utilization of MSW.

During two days the experts have been brainstorming the main task of the session — search of optimal solution for liquidation of existing waste disposal facilities, of which there are 51 in the region, and development of working waste management algorithms. Such algorithms must provide for transition from waste depositing at landfills to its utilization and recycling. Three incinerator complexes are already planned for construction in Yamal.

At the meeting the company presented its KTO Complexes of Thermal Destruction of MSW, which are based on controlled combustion of waste (MSW, biological and medical) at high temperature. Environmental safety of the complexes is provided by multistage system of gas purification, which prevents emission of hazardous substances into the air. 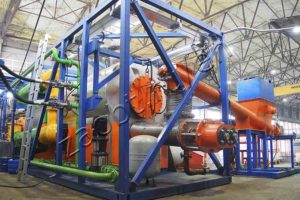 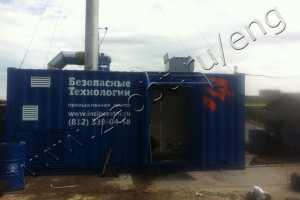 Another solution of “ST” Group presented at the session appeared to be the TDP-2 Continuous Waste Pyrolysis Unit. The equipment allows recycling of oil-containing waste, plastics, rubber products waste (including large-sized tires).

In addition to the environmental safety and efficiency of the TDP and KTO units, the economic aspect of their operation was also noted. Thus, as a result of waste neutralization in KTO it is possible to recover thermal energy via steam, hot water, electricity production. Waste recycling in TDP-2 pyrolysis units makes it possible to obtain valuable products from waste — pyrolysis gas and boiler fuel as fuel resources, as well as dry residue suitable for road embankments, land reclamation, etc. Participants of the session confidently included the environmental equipment of «ST» IG into the list of technological solutions recommended for implementation.

In total, more than 170 TDP and KTO units are in operation in Russia and other countries, some of them in the Arctic zone. The solutions have been developed taking into account the climate and distancing of the region from developed infrastructure – all in accordance with April 2022 meeting on the development of the Arctic zone of the Russian Federation where the particular importance of the implementation of investment projects in the Far North, including environmental activities was noted.

This strategic Session on ecology was not only the most important event within the framework of solving the problems of the Arctic zone, but also within the renewed policy of import substitution. Public-law company «Russian Environmental Operator» («REO») conducted an analysis of manufacturers of waste management equipment, and designated «Safe Technologies» IG among its main suppliers.

The event was widely covered by the regional media.

«We conducted a poll among the population and one of the key issues was waste management, so we decided to pay attention primarily to this topic. This is the first time such an event has been held among the Arctic regions,» explained Sergei Khrushchev, director of the Department of Natural Resources and Environment of the YNAO.

«Before the territorial scheme for waste management comes into force, according to the plan from the 25th year, we have a large amount of accumulated waste landfilled at the disposal facilities, which must be eliminated. And then there is the issue of recycling this waste. The volume is large, with such a wide territory of the region, some particular universal solution is not enough», said Sergey Khrushchev, Director of the Department of Natural Resources of the Yamal-Nenets Autonomous Okrug.

At the industrial site of “Sosnovoborsky Machine-Building Plant” testing of modernized TDP-2-3000 took place. Based on the technical specification and the needs

On May 30 in Salekhard, Yamal the first strategic Session on ecology was launched. This event aims to find and develop solutions for the elimination of waste disposal