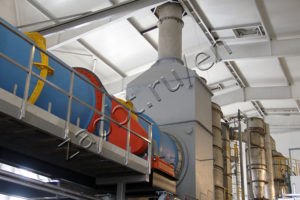 LokoTech Group, acting on behalf of the Russian Railways, and Safe Technologies LLC, signed an agreement on elimination of environmental damage – so-called ‘phenolic lake’ formed during the dumping of waste from the LVRZ gas generating station (Ulan—Ude Locomotive and Car Repair Plant). Waste disposal in the settling basin ceased in 2005, when the plant switched to using natural gas. However, the setting basin was formed without compliance with environmental requirements: the 27 000 m2 basin was not isolated from the environment, so that its phenolic content was regularly seeped into the groundwater and transported through Selenga to the unique Lake Baikal.

Wastes in the basin contain phenolic, coal tar and oil-contaminated soils and belong to the II hazard class. According to the data obtained by the analytical center of the Republic of Buryatia in 2014, the concentration of ammonium and oil products in the setting basin is tens of times higher than the maximum permissible concentration, and for phenol and some other pollutants — thousands of times higher.

The signed contract is the first serious attempt to eliminate the damage caused to the nature in 15 years. Attempts to backfill the excavation with sand-gravel mixture before 2008 resulted in squeezing out oil wastes hidden under the layer of phenolic water.

Under the contract, Safe Technologies IG is obliged to carry out design and survey works, work out options for settling tank cleaning and offer chemical, mechanical or thermal technologies for decontamination of a large volume of hazardous waste (according to preliminary data up to 83 thousand cubic meters). Because of the accumulated twenty years of experience in the environmental protection sphere, the choice of BT IG as the contractor under this contract and as the leader of the environmental segment is obvious.

CJSC «Safe Technologies» together with the Institute of Catalysis named after G.K. Boreskov SB RAS received a patent for an innovative model of the plate

On March 25-26, 2021 the specialists of CJSC «Safe Technologies» took part in online meeting with the representatives of Rosatom. The meeting focused on