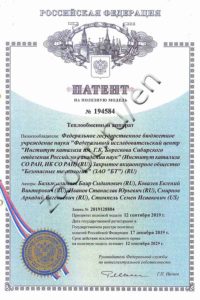 CJSC «Safe Technologies» together with the Institute of Catalysis named after G.K. Boreskov SB RAS received a patent for an innovative model of the plate heat exchanger. This type of heat exchange equipment is widely used in chemical, food, pharmacological and many other industries.

According to the description of the current model of the heat exchanger, its difference from the existing models lies in the control of the temperature regime of heat exchange. The main disadvantage of a standard plate heat exchanger, where heat exchange occurs in an intricate network of narrow channels formed by pressed profiled plates to each other, is the inability to control the uniformity of the distribution of flows. Lack of homogeneity leads to reduction of heat exchange efficiency, and with time to deformation of the plates and failure of the unit. Installation of thermocouples dramatically increases heat exchanger cost.

The proposed innovation lies in the visual clarity of the distribution of temperature zones in the heat exchanger, due to a special thermal paint, which changes color depending on the temperature. It requires neither a specific heat exchanger design, nor expensive additional devices, at the same time, accurately and clearly showing the temperature «emergency» zones.

The innovative heat exchanger was developed as part of the R&D for highly efficient catalytic emission control systems, which resulted in the industrial emission catalytic oxidation plant SafeCAT.