On April 13, 2018, a successful launch of the urea-formaldehyde concentrate (UFC-85) and low-methanol formalin production plant was successfully launched in Lithuania. The customer was the AB ACHEMA concern.

This contract was obtained as a result of a tender conducted in 2016 where four European companies participated besides Safe Technologies. Our company won the tender by the combination of advantages. 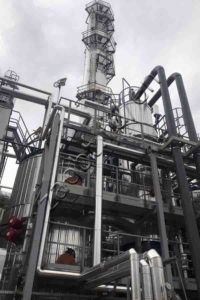 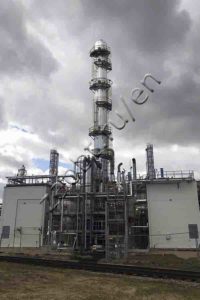 The capacity of the Formalin / UFC synthesis plant is 100 thousand tons per year (in terms of 37% formalin). Advanced metal oxide technology makes it possible to produce formalin in the concentration range of 37-55% wt. without introducing changes in the technology.

The gas treatment system of the Plant is based on the principle of catalytic oxidation of emissions on a glass-fiber-based platinum catalyst. A unique catalyst was developed by the Boreskov Institute of Catalysis SB RAS as part of a joint project with ST Inc. on the catalytic treatment of industrial gases from volatile organic compounds. Production facilities of Safe Technologies enable turnkey manufacture of the equipment of any complexity. Thus, as part of the import substitution program, in addition to catalyst cartridges, mass transfer devices are produced at our own industrial sites – countercurrent packing to improve the process efficiency without increasing the column unit dimensions. These packing is also used in the technological equipment of AB Achema. 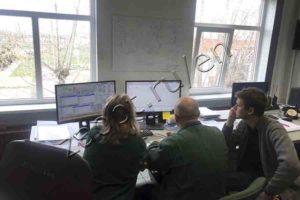 High-pressure equipment in Europe is subject to special requirements, as it poses an increased danger. In this regard, all devices within the project have passed special certification for compliance with Directive 2014/68/EU of the European Parliament on the requirements for Pressure Equipment Directive (PED).

The end of 2022 was marked with a large-scale event for the Russian industry: on December 22, the day of the 65th anniversary of the company, the Volgograd Refinery

At the very end of the last year 2022 in Moscow there was the traditional conference of the journal “Chemistry and Business”, which is a platform for dialogue

The expiring year was marked by prominent business event: from November 29 to December 1 the international forum-exhibition “Russian Industrialist-2022” took